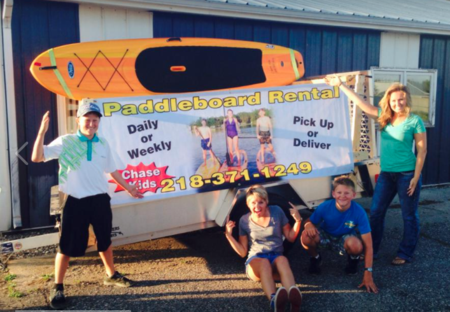 equipping lake enthusiasts to jump into life, or the lake.

It all started with 6 paddle boards and a banner. At age 15 I wanted one thing and one thing only. A stand up paddle board. Having grown up at the lake I yearned for toys that would get me onto the water. I grew up with 3 siblings on a summer resort. My older sister Maggie is now 23, younger brother Levi is 17, and Noah is 15. Our days growing up began with raking the beach, cleaning fish guts, or toilets; but each day ended with water skis or a kneeboard or kayaking across the lake.


In the spring of 2014 my eyes were set on a paddle board. I have been raised in a family of entrepreneurs thus my Papa Sparky made the stipulations that I would have to rent the boards during the summer and pay for them myself. Thus began the adventure of driving down gravel roads with my dog riding shotgun and boards strapped in the back. That summer I never got to paddle board, they were rented out everyday.


In the fall of 2014 my Papa had purchased a gas station. That winter and early spring myself, closest friends, and a willing brother or two went to TOWN on that place. Taking down the drop down ceiling, taking up tiles, removing all the sheetrock, removing live wires - you name it- We had to do it. My days were spent at Home Depot, nights spent knocking sheetrock down. I learned how to use the skill saw like a pro.


Launching into summer 2015 the shelves were stocked with Yeti coolers, Costa Sunglasses and shirts, tourist information, O’brien skis, life vests & tube ropes alike. In addition to that our smoothie machine was constantly running- as were our mouths. That summer flew by incredibly fast. I spent my days lathering the sass & delivering paddle boards. The greatest lesson I learned included communication, going with your gut, and staying positive.


Diving into summer 2016 we took on Glendalough State Park. We provided bikes, paddle boards, kayaks, life jackets, row boats, and paddle boats. In addition to that the store in downtown Battle Lake thrived. The phrase time management has NEVER meant more to me.


Summer 2017: In February of that year I attended a Surf Expo in Orlando Florida where we picked up CLEAR KAYAKS! Days were spent at the store, nights on the water guiding night tours. We provided LED light bars that suctioned to the bottom. In addition to that we provided surfing lessons behind our wakesetter!